Industry and government are looking forward with anticipation to Innovation Africa 2016, which will see the gathering of ministers and government officials at Africa’s leading annual education and ICT forum taking place from 20th to 22nd September 2016 at the Safari Park Hotel, Nairobi, Kenya.

More than 30 African countries will be represented at the summit, allowing industry leaders and investors to engage in pre-scheduled meetings with ministers and officials.

Now in its 6th year, the summit will be a hive of activity as 200 government officials comprising of ministers, secretaries of state, deputy ministers, permanent secretaries and director generals are joined by board level members from some of the world’s leading education & tech companies including Microsoft, IBM, Intel, Oracle, Bi-Bright, JP – inspiring knowledge, Positivo BGH, Teachers Media International, Pearson & Wiley amongst others.

To date education & ICT ministers along with numerous high-level representatives are confirmed from the following countries:- 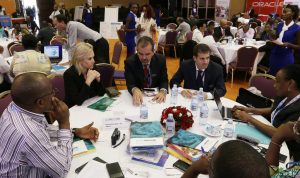 Innovation Africa was conceived and is organised by AfricanBrains, a division of the international Brains Network Group who are dedicated to attracting investment into education and technology in Africa through building public-private partnerships. Previous events have taken place in Zimbabwe, South Africa, Botswana, Rwanda and last year in Uganda.

He added, “We are delighted that Africa’s number one high-level forum for education, ICT and innovation will be taking place in Kenya this year. On behalf of the Government we will be working closely with AfricanBrains to ensure an event of the quality that is the continent’s largest annual gathering of ministers for education, higher education, ICT and science & technology.”